Home Europe Trade in Central and Eastern Europe: the case of the Visegrad Group

In May 2004, the European Union experienced its largest-ever round of expansion by welcoming 10 new countries – including the Czech Republic, Hungary, Poland and Slovakia. Formally known as the Visegrad countries (or V4), these member states have experienced considerable economic progress over the last 10 years which is hard to overlook. 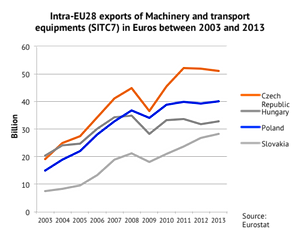 Joining the political-economic union as relatively weak economies, the Visegrad Four have gained several benefits from their EU membership by exploiting their huge potential over the last decade. The biggest success clearly happened in exports with these countries contributing heavily to the European trade balance. In fact, V4 countries have seen their exports (of goods and services as a percentage of GDP) grow by 22.65 percentage points on average between 2003 and 2013, which is well above that achieved by older member states.

While the direct impact of EU membership on the V4’s economies is not easy to assess, their accession to the Single market contributed to several economies of scale, leading not only to lower average production costs because of larger scales but also contributing to a certain level of specialisation in production processes. In fact, looking at the Visegrad Four’s trade composition in 2013, more than 50% of their commodity exports concerned SITC7 products (i.e. machinery and transport equipment goods). Since their accession to the EU, the V4’s exports of SITC7 goods have considerably increased, the largest proportion of these products being sent to other European countries. This follows a general trend already in place in the EU: intra-EU trade accounts for more in the total trade of European countries than extra-EU trade (even though the latter is gaining in importance with the increasing international presence of emerging countries). The Visegrad Four are no exception to that: the highest contribution to exports growth has come from their exports to older member states. Nevertheless, the V4 countries are successful in external markets too, a stronger international presence demonstrated by a four-fold increase in their exports to non-EU28 countries since 2003.

Undoubtedly, EU enlargement was not only beneficial for new member states. It provided Western European countries with “a unique opportunity for their companies to build new or scale-up existing production capacities in the V4 that would make them more competitive both in the internal EU market and the external market as well” . In the context of intense competition and a race for the lowest-costs in the market, the opportunities given by EU enlargement could be seen as a “win-win situation” for both the older and new member states. Above all, specialisation in car manufacturing (coming back to the SITC7 products) has become the most important export-oriented activity in the V4. It is clear that nowadays the Visegrad countries outperform older member states in terms of car production and have become the second largest car exporter in the EU after Germany.  This specialisation is not surprising given the fact that these V4 members have been able to attract foreign companies to the region thanks to a pool of talented labour, lower costs and specific incentives. Even though intra-EU exports, especially to the V4’s hub country in terms of exports, i.e. Germany, are important, looking further afield than the Western European market and being less dependent on the German economy are clearly just some of the several challenges the Visegrad Four will have to deal with in the future.

In addition to expanding their export opportunities and allowing the V4 to become a real heavyweight among EU exporters, the accession to the political-economic union has also an impact on V4 citizens’ quality of life. In fact, three out of the four Visegrad countries jumped in the quality of life ranking (although Hungary is an exception) showing the benefits of joining such a union go beyond only economic aspects. As catching-up theory would suggest, some income convergence should be seen between old and new member states. In the case of the Visegrad countries this is what has happened over the last decade: the income gap between the V4 and older member states has narrowed by a third and the GDP/capita measured in PPS  has increased from 49% of that of the EU15 in 2003 to 65% in 2013. We can recall from our international economics courses that some price convergence may have gone hand in hand with this income convergence. Knowing that the price level gap for goods is smaller than for services, the highest price convergence was expected to be seen in the second sector.  In accordance with the theory, the overall price level of the Visegrad Group had increased to 56% that of the EU15 in 2012, from 46% in 2003, the price gap narrowing by a fifth. Tackling the highest price gap in state regulated services (e.g. healthcare, education) constitutes a challenge for the future, where “lack of market liberalisation and a government preference to provide many services for free or at low costs, albeit often at the expense of quality”, remain relatively frequent. 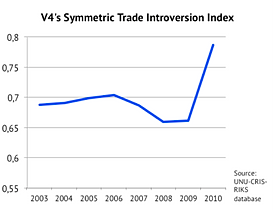 An interesting finding about trade and the V4, which is not especially related to the accession of its members to the EU, is the presence of increased intra-regional trade among these countries (i.e. exchange of products within the Visegrad Group). Empirical data suggest the recent financial crisis might have triggered a gain in competitiveness in these countries. As shown by the symmetric trade introversion index  measuring the relative intensity of intra-regional trade (i.e. whether the intensity of intra-regional trade varies at a faster or slower pace than extra-regional trade), the exchange of goods inside the Visegrad Group first stagnated, then declined, and finally grew in importance after 2009. Even though the crisis seems to have triggered structural changes in central and eastern Europe, the Visegrad Four must not forget that competition is fierce for slices of a smaller pie, and therefore no investment should be taken for granted. A shift towards home-grown technology and innovation is a challenge the V4 should accept, climbing up the global value chain progressively.

Looking back at 10 years of EU membership, the economic benefits of EU accession regarding the export of goods have been realised, but the Single market should also be open to services. Increasing trade in services among V4 countries and within the European Union as an aggregated region is a step towards further and better integration. Nevertheless, no one can deny the political and economic presence of the Visegrad Four in todays’ European Union, an importance the nomination of Poland’s Prime Minister, Donald Tusk, as President of the European Council would certainly seem to highlight even more.

Trying to make sense of the economic forecasts around Brexit

Atalanta: Eu’s anti-piracy operation in the Gulf of Aden

The promise of India

Waking up from monetary illusion

How to Ace Your Exams

The face of the Asian continent in the wake of an...