Home Europe Retirement and pensions in Europe: a challenge for the future

Before the welfare state, pensions were guaranteed by lifetime savings and by one’s offspring – the more children one had, the less one had to worry about survival and good living in old age. With the welfare state (e.g. Bismarck’s social reforms of the 1840s), the burden on children was relieved. The payment of contributions to a pension fund means to invest in one’s own good life in old age. Depending on political context and cultures, nowadays some pension schemes’ prime objective is to reduce poverty among the elderly in society (e.g. the UK), whereas others reward pensioners relative to what they contributed over the years (e.g. Sweden, the Netherlands). 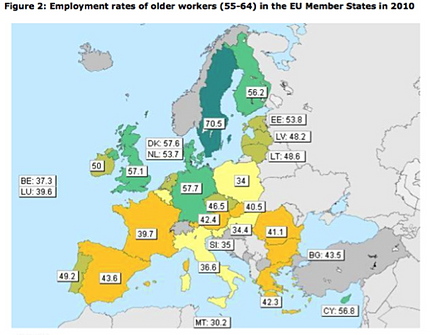 All pension systems, Pay-As-You-Go (PAYG) or funded, involve the transfer of resources to pensioners (who consume but do not produce) from workers (who produce more than they consume) . This system worked for a long time, but the growing economies of the old days do no longer exist. Life expectancy is increasing and fertility rates are falling. The contributions towards the pension fund do not suffice anymore and the state needs to intervene with additional payments. Currently 18% of Sweden’s population is aged over 65 and receiving pension payments – by 2030 the number is expected to rise to 30% . This is a common trend across many European countries. Back in 1991 in Germany, four workers supported one pensioner, whereas in 2030 only two workers are expected to support one pensioner.  Hence, the welfare state, which needs a growing economy, needs to reform in order to survive.

Countries such as Belgium, France, Italy and Spain tend to pay generous pension benefits of up to 50% of GDP per capita for retirement spans of up to 23 years. Pension systems in those countries are vulnerable of becoming less generous. Germany, the Netherlands, Sweden and the UK have shorter retirement spans (18-20 years) and face a challenge similar to those mentioned above, but are expected to maintain the current size of the workforce, mainly through immigration. Poland, Bulgaria, Croatia and the Czech Republic face the challenge of having moved from centrally planned to market economies and although pension spans are shorter, these countries nonetheless face issues of sustainability even at lower benefit levels. This is a challenge for Europe: how to preserve prosperity and social services on the one hand, but remain competitive and not be indebted and drown in illiquidity and on the other.

One solution would involve adjusting the span of pension systems so as to cover not more than the last 15 years of life, to reduce the generosity of the systems to merely prevent old age poverty and to support people to work longer. An additional part of the solution might be to change the retirement income calculation revising the eligibility requirements to decrease the benefit levels. But a factor that also needs to be considered is that people are not necessarily willing to surrender pension benefits, which makes reform a complex political manoeuvre. Most of the population seems unaware that a growing population of workers had made increased benefits of the past possible, not the generosity of politicians or a fair return on contributions. 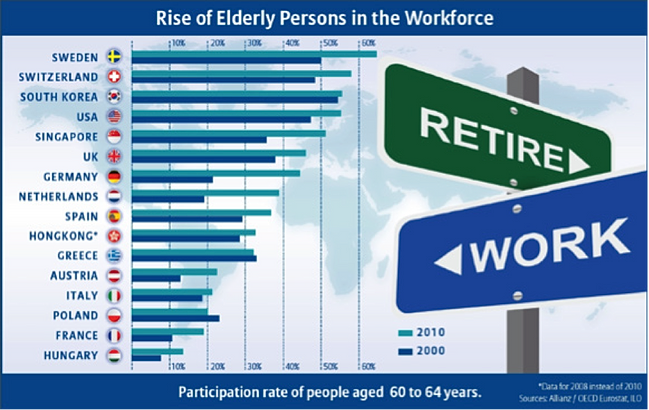 In 2013 a report by Allianz revealed that there has been a rise in the number of elderly workers in the workforce and simultaneously lifetime benefits have been cut in 16 OECD countries by more than 20% on average. It is mostly in Germany and the Netherlands that 60-64 year olds participate in the labour market – their numbers have doubled over the past decade. According to the report, another solution is the diversification of retirement income, a mix of occupational and private pension savings. Besides more and different ways of saving, creating job opportunities for the elderly seems a straightforward solution – perhaps combining a part-time job with a partial pension. The World Bank suggests such a multi-pillar system to foster diversification, sharing risk among country, companies and individuals, varying proportions depending on different market and cultural specifics. Such a system ought to cater for financial market volatility. The retirement system of the future could be looked at like an investment portfolio of different assets with different risk profiles to deliver a certain income stream. It is a question of balancing wealth management during active working life and expenses and life expectancy after retirement. Again culture and political context intervene – should this wealth management be entirely free (-market) or somewhat state controlled? The Netherlands and Germany incentivise their citizens to make private arrangements through tax reductions and Hungary nationalised occupational pension schemes to shift its system. Additionally the World Economic Forum suggested that governments should provide financial education to individuals to help them plan their finances for old age .

In any case, there is no “one-size-fits-all” solution. The challenge for the future consists in combining raises in retirement ages to ideally achieve a duration of retirement of 15 years (currently 18 years for men and 23.5 for women) , reshaping benefits giving priority to preventing poverty, encouraging the labour market to find ways to keep older people in the workforce, be it even part-time work, through lifelong learning and workplaces suited to older workers as well as a more flexible legal framework. Also increasing immigration and reducing informal labour is part of the solution, as well as supplementing pension funds with further taxes and diversifying the retirement income through personal savings and automatic enrolment in savings schemes.

In conclusion, if people are willing to work as long as they feel healthy, the pension system can continue to work. Alternatively, a more basic benefit needs to be considered. But in either case it must be a long-term strategic decision taken by a long-sighted government grounded in broad societal consensus to be followed for decades into the future.

Can China produce its own luxury brands?

The Puzzle Embedded in the “ASEAN Way”