Home Rest of the world Africa: still a place to invest in?

At the moment, Africa is the focus of a lot of attention. Ebola, terrorism, natural disasters, violence and political instability, like the coup-d’état in Burkina Faso are just some of the matters being discussed. However, we often forget that from an economic point of view Africa is not doing so badly. Of course, Africa is a very poor continent with a GDP of $2.6 trillion which is about 8.5 times less than that of Europe or the United States. Taken alone, China has a GDP higher than the whole African continent. Therefore, Africa’s level international integration seems relatively small. Nevertheless, from an economic point of view there are several aspects which make it attractive in terms of investment potential.

For instance, when looking at Foreign Direct Investment (FDI), a 635% increase in FDI stocks can be observed between 2000 and 2012 totalling a staggering $246.4 billion.  More than 50% of FDI is from three main regions of the world: the United States, China and the European Union. Moreover, regarding FDI flows, there was an increase of 7% in 2013 to approximately $56 billion. In particular, sub-Saharan Africa has been benefiting more from investment from the rest of the world than North Africa. Intra-African assistance is growing due to increased regional integration which has not only led to more investment within the continent but could also attract more FDI. 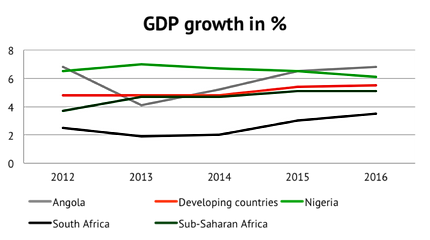 When thinking about investment in Africa, clearly natural resources are primarily responsible for attracting FDI. For example, South Africa, due to its valuable metals and minerals and Nigeria and Algeria due to their oil and gas reserves, are top recipients of Africa’s FDI.

Nevertheless, natural resources are no longer the only reason why investors finance projects in Africa. A shift to more consumer-oriented activities can be observed as the African middle class is slowly developing. The top three new areas of investment, accounting for more than half of all the FDI projects in 2013, are technology, media and telecoms, sales and consumer goods and financial services.

Economic perceptions of Africa have increased a lot over the last few years, reaching second place in terms of economic attractiveness behind North America. Several weaknesses like unemployment are even seen as opportunities. Nevertheless, slightly lower GDP growth as well as social unrest and political instability remain major problems in Africa, making it a high-risk investment. Therefore, carefully investing in some assets or regions of Africa can provide positive returns.

This site uses Akismet to reduce spam. Learn how your comment data is processed.

Misbehaving in Brazil : A Luxury for a Few

Minimum wage in Germany: Show off or not ?

Is this the end of infinite monetary easing?

A testimony: My adventure in the Antarctic

The Solvay Student Review is a non-profit organization, gathering students who share the same passion for economics. It involves SBS-EM students as well as students from everywhere around the world, with correspondents and partnerships in 15 countries.
Contact us: Solvay-Student-Review@besolvay.be