Home Rest of the world Should we abolish or monitor the industry of child labour?

Child labour is currently driven by poverty and a strong demand from companies. As wages decrease, low income families have the need to send their children to work. Most often child labour goes hand in hand with exploitative and precarious working conditions.

As the International Labour Office (ILO) stated in its 2010 Global Report on child labour, there were approximately 215 million children between the ages of 5 and 17 working in 2010. Among them, 115 million children are still exposed to “hazardous work”, which according to the ILO refers to the worst forms of child labour.

The ILO also highlighted that child labour has the highest occurrence in Sub-Saharan Africa with a rate of 25.3% of the children population in 2010, meaning that one in every four children is working, followed by Asia and the Pacific with a rate of 13.3%. In Latin America and the Caribbean, child workers make up 10% and 6.7% of the children population. Moreover, despite a 3% drop in the number of child labourers globally within the timeframe of 2004-2008, the process of eliminating child labour is still too slow and has decreased in terms of pace compared with a decline of 11% between 2000 and 2004.

There are several reasons why eliminating child labour is necessary, since it does not only disrupt social and economic development by depriving children of education but also promulgates poverty and weakens economies via losses in competitiveness and in productivity. In fact, there are many different types of development policies aimed at tackling child labour, each following sometimes a very different rationale.

The International Programme on the Elimination of Child Labour (IPEC)

The ILO’s International Programme on the Elimination of Child Labour (IPEC) has been developed with the clear objective of eliminating child labour, especially in its worst forms. Through country-based programmes which promote policy reform, the IPEC is giving tangible benefits to children and their families. Children benefit from services such as education, training and sustenance to create generation opportunities. An example of these projects is the CEPROMIN (Centro de Promoción Minera) conducted in Bolivia. It provides food and high-quality education to approximately 450 children of mining families living in mining camps.

However, in August 2014, the government in Bolivia passed a controversial law legalizing child labour from the age of 10. This measure was strongly criticized as it violated the ILO’s conventions on child labour. Nevertheless, the government believed that this strategy would not only lead to a decline in child labour but also reinforce the rights and security of children labourers. This approach is based on the belief that wages paid to children would increase, because there would be no longer any risks of fines and sanctions resulting from using illegal child labour. Hence, the number of child labourers and working hours would decrease too.

The IPEC involves the participation of a wide range of bodies such as employers’ and workers’ organizations, other international and government agencies. Currently, it is the largest programme of this kind in the world, with an annual expenditure on technical cooperation projects that reached over US$61 million in 2008.

Conditional Cash Transfer: the example of the Progresa/Oportunidades programme

Another approach to combat child labour consists of conditional cash transfer (CCT) incentives that induce parents to send their children to school. The Progresa/Oportunidades programme in Mexico is a good example in that it provides poor families with monetary grants to ensure that they have access to education, health and nutrition. Here the rationale is that poor families are aware of the opportunity costs of sending children to school and are therefore not keen to invest enough in human capital. As a result, current and future generations get caught in a poverty trap. This program currently helps more than 4 million families in rural and urban areas in Mexico.

CCT has wide support from many international agencies and is even considered sometimes as a more effective approach than making basic education compulsory since, without complementary policies, the incentives to send children to work would still remain strong. 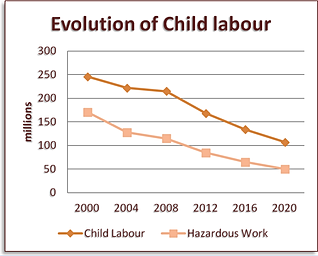 A third approach consists of measures aiming at regulating child labour, in order to prevent abuses and provide support services to working children. This method is most commonly associated with “UNICEF’s checklist” which consists in expanding educational opportunities through “time off” for standard or workplace schooling, encouraging stricter law enforcement against illegal child labour trafficking, providing support services for parents and children working on the streets, and working to develop social norms against the economic exploitation of children.

The final approach involves the imposition of trade sanctions against countries that permit child labour or even to boycott the goods that are produced by child labour. This strategy is well intentioned but it needs to be considered carefully, because once children cannot work in the export sector, they will almost certainly be forced to work in the informal sector, where wages and other working conditions are generally worse. For example, the World Trade Organization (WTO) imposed trade sanctions on sporting goods imported from Pakistan, because this industry used child labourers in its production chain. As a result, there was a decline in production and in revenue for workers…

Furthermore, companies and their suppliers also play an important role in eliminating child labour. In order to do so, they can collaborate to identify the causes and to determine a more efficient solution to tackle child labour. For example, companies could set up cross checking ID cards and certify human resources are aware of policies concerning child labour. Since the ethical behaviour of companies is strictly monitored by customers, the media, investors and other stakeholders, allegations of child labour in the supply chain can sometimes damage a company’s reputation and even lead to a fall in revenue.

To conclude, even though the number of child labourers declined globally between 2004 and 2008, the process of eliminating child labour is still too slow. For this reason, the International Labour Office (ILO) and other institutions such as the UNICEF and governments have developed several strict regulations and policies that aim at protecting the social rights and at guaranteeing the security of children labourers. However, in order to successfully fight child labour, it is crucial that employers, national and international corporations interact with one another.

Atalanta: Eu’s anti-piracy operation in the Gulf of Aden

Blockchain and digital disruption in the financial world

Deflation for dummies: The dangers behind a complicated phenomenon